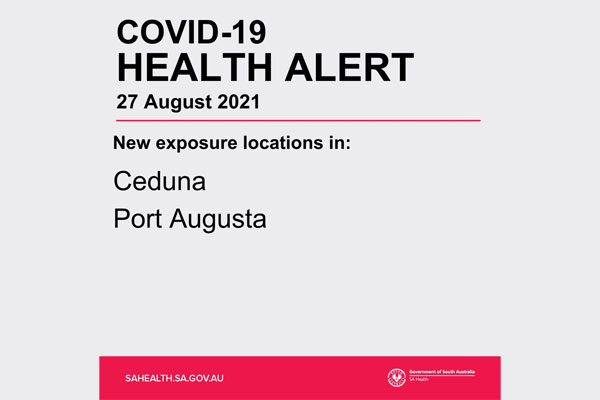 South Australian authorities have identified petrol stations linked to truck drivers who travelled through three states in WA, before testing positive to COVID-19.

The two drivers were tested as part of routine surveillance in NSW on Wednesday, but being essential workers were allowed to embark on their journey through Victoria and South Australia to WA, where they arrived on Thursday night.

They received their test results on Friday and their employer informed WA Health.

On Saturday, SA Health listed two petrol stations in Port Augusta and another two in Ceduna, where the drivers are believed to have stopped on their journey through the state.

Anyone who was at the locations at the specified times must quarantine for 14 days and undergo several COVID tests during that time.

Public health alerts have already been issued in WA for a BP Truckstop in Norseman, the IOR Petroleum Fuel Station in Widgiemooltha, the Shell Fuel Station in Southern Cross, and the Mobil roadhouse in Yellowdine.

Anyone who visited the venues during the listed times must get tested and isolate for 14 days, but broader restrictions have not been introduced in the state.

Premier Mark McGowan on Friday moved to reassure West Australians the risk to the community was low, as the men had minimal contact with others.

"Both truck drivers wore masks whilst outside of the truck," he told reporters.

"They reportedly slept in their truck last night and had minimal contact with others throughout their travel."

Four people who did interact with them have been ordered into a two-week quarantine, he said.

The testing regime that caught the men's infection, but also allowed them to travel with a test result pending, has been successful nation-wide during the pandemic, Mr McGowan said.

"They've done nothing wrong," he said.

"We've had this in place now for well over a year.

"This is the first time, to the best of my knowledge, it's ever thrown up a positive case."

The announcement came after Friday's national cabinet meeting, at which the WA premier defended his refusal to agree to drop borders once the nation achieved 70 per cent vaccination coverage.

"The whole idea that at 70 per cent vaccination you deliberately infect people, I just can't tolerate it," he told reporters.

If you attended an exposure location, you are required to follow the relevant health advice.